Following Through with Your Intentions 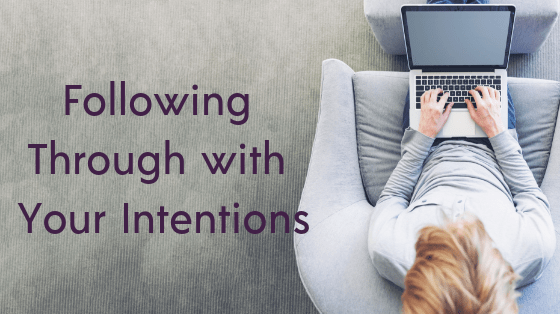 Why don’t we follow through on the things that we “should” do?

In Following Through: A Revolutionary New Model for Finishing Whatever You Start by Steve Levinson and Pete Greider, the authors propose that we have two guidance systems:  the Primitive Guidance System and the Intelligence-Based Guidance System.  Each of these systems pulls us in different directions like a car with two steering wheels.  The Primitive Guidance System, PGS, has the most control and is based on instinct.  The PGS responds to the squeakiest wheel – I’m hungry: Look for food.  I’m bored:  Look for something more interesting to do.

The problem is that there is no connection between the two systems.  On April 14 your taxes will become the squeaky wheel and your PGS will respond.  You will race the clock to get your taxes done.  They may not have been done early, but they were on time.  This is the way your guidance systems work.  So you see, poor follow through is not so much a character flaw, but a flaw in the design of your mind and your guidance systems.

Now that you know why poor follow through occurs you can take steps to work around the design flaw.  The key is arranging your environment so that your good intentions are the squeaks that get the powerful PGS’ attention.  Here are a few of the suggested strategies to effectively follow through with your intentions.

Spotlighting – Your mind becomes distracted by many voices when you are trying to accomplish something: the ones that want to get the project done and the ones that just want to sit back, relax and not get it done.  The trick in spotlighting is to make sure that you are paying attention to the “right” distractions or cues.  Here is an example of a cue:  You see a big, juicy hamburger on TV and then become hungry for a big, juicy hamburger.

Here are the steps involved in spotlighting:

For example, a manager who also coaches a baseball team uses baseball theme to provide cues throughout his day.  His intention is to coach his staff the way he coaches his little league team.  He puts a photo of his Little League team on his desk, uses baseball themed notepads, and hangs a baseball cap on the wall.  All of these cues remind him throughout the day to do a better job motivating his staff.   What behavior would you like to develop?  What cue would work for you the way that baseball worked for this manager?

Going too far – Make the intention more meaningful or threatening by pledging to violate it in a big way. Essentially you make a deal with yourself. If your intention is to stop smoking, make a pledge that if you are going to smoke a cigarette, you must smoke two cigarettes, one after the other. You can’t just smoke one. To your Primitive Guidance System smoking becomes a threat rather than just satisfying a craving because you HAVE to smoke two cigarettes.

Right Before Wrong – With this strategy you make a deal to do the right thing before the wrong one. For example, let’s say you decide to start eating healthy snacks, but find yourself reaching for something unhealthy instead. Make a deal with yourself to eat a healthy snack first and then eat the unhealthy snack if you still want it.

You have been introduced to three strategies to help you follow through on your intentions.  Try these strategies for yourself.  I am very interested in hearing about your results.  As you go through this, keep in mind that we are talking about your mind here.  If your mind fails (such as forgetting about your routine), you think that you have screwed up.  If your heart failed, you would not think of yourself as a failure.  It typically takes some time for habits to change.  Give yourself a break and give yourself time to fully integrate into the new behaviors.